of a heavenly puzzle

dressed up as the news

Peace, love and fighting
In all four corners of world
When will we make it?

Am I not at peace?

What is bothering me then?

Is it the future?

I can’t get no peace

When my radar works too well

warning me of pain 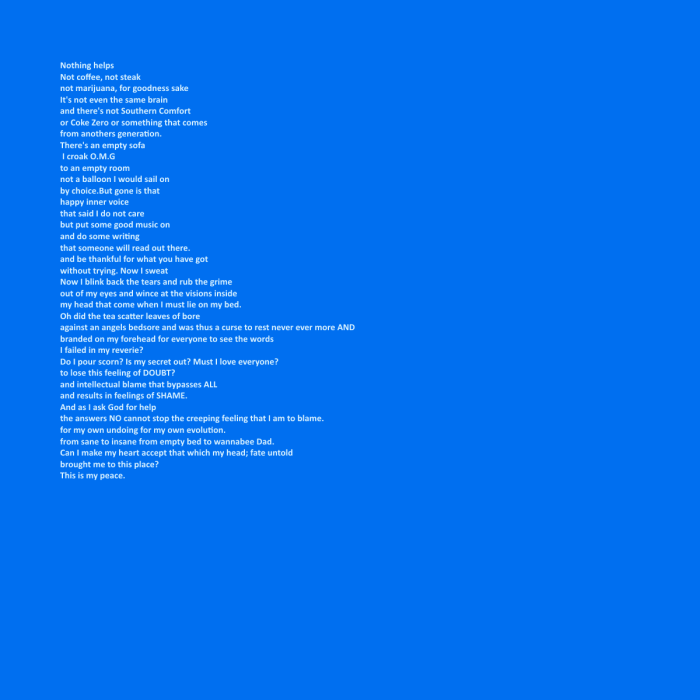 Created by Andrew Watkins in Paint.net

I forgive me, I forgive you too. Whatever you done it was justified by blue.

And now we can create something new.

Bent out of shape and reeling from yet another blow? This is the forgiveness we love and know. Love because it is so dear to us, so close to who and what we are. And know because it’s happening now. Revenge and sweetness. Bliss follows. Because. Of. What You. Did.

Follow on and through, we are both bleeding from our love and sorrow. Like roses losing their petals to a foul wind we walk on heads down. Glowering at the sky. Who is walking by? Strangers? Or people on the inside? Are they on your side or just nobodies? Pray in silence and hope for forgiveness. And victory. Now you are so far down the road or should that be ‘we’. Other people are used like matchsticks to start a fire here and there or to put one out just in case we get caught. We can deny it all. What evil plan? I improvised. I deny all knowledge. Prove it! You dig your own trench and put the gun in my hand. All I have to do is squeeze and BANG! It’s all over. But I want justice not revenge. I want you to know it was me. By my hand. Cool as you like. I dispatched you to the next life. But then you’re dead! It’s not fair!

Behind us is the evil that men do but there’s more in front too. And to the side. Eyes smiling wide inviting you in like a Venus Flytrap. A fly. Curious. Eaten alive. Digested by processes unknown.

Behind us is the blame for what someone did at some time. probably. Behind us is the reason for the pain. Forget yourself.Behind me. Get behind me Satan. I will go on without you and then destroy you at my will. At my leisure.

Hang on were friends and you are allowed to pull the wool over my eyes on the understanding that I will rip out your soul if you get caught.

It came in the night, the words, ‘It’s our city’

then echoed within many minds. ‘It’s mine.It’s mine.’

The capacity for fear. The fear of knowing ringing in your ears..

Ripples on the stream of humanity

pouring through the gates of 21st Century consciousness.

or see the defeated drunken gambler you caught in a fight. The noble

savages few passages of a rite, tradition and manners put aside. Instead you focus

for the violent struggle imagined or real, nobody really knows

or cares for a straight jacketed society neatly divided like a cemetery.

Better Go home and read some Plato. Or better still draw him. But do not let

inflamed passions of the weak convince you otherwise. Society is

paralysed by the weak being dominated by the strong, families split in

two, children left behind, or divided like belongings in boxes. Children

Give children and peace a chance throw away the banner and Michael Jackson said start with the man in the mirror.

words that carry a payload

When the join between past and present comes,

it comes with words that carry a payload.

it’s all the same when hear them. The sunken feeling is an inevitable as when you miss a step and know

you are about to fall. You might as well just bury your head in the pillow.

Maybe you have them rattled. Why else did they get out the big guns?  (Words that carry a payload.)

Attack is the best form of defence they heard, must ‘ave. As I have nothing to offend them.

Or maybe they want to join in and I am holding auditions with words with a payload.

I learned when I was five that words with a payload existed and that they were a blunt but effective tool only I thought them too primitive to use myself and thought that  they that used them must be guilty of lazy thought.

Today the jury is out as I never know what my situations will be and what will be necessary. Insert legal disclaimer here. But this is my reaction to receiving words with a payload from a courageous coward I know very well.

Personally I believe in non-proliferation of words with a payload but as a poet I have a conflict of interest and for years practiced (now I recall) my own words with a  payload on whomever would listen as I believed that nobody would believe my little words of truth.

So as a verbal combatant I now lay down my arms and destroy my words with a payload! I do this with the thought and prospect of improved dignity for those I converse with and see, but I reserve the right to use such words professionally.

But I never know when I will need them, even internally. If the law was not an ass perhaps I would now feel better or perhaps it’s my contracting skills that are lacking, or perhaps I need some backing from a verbal authority, and I could do with parties aggrieved to admit a grievance claim against me. I could argue I had grounds for verbal warfare. I channelled my aggression into my words and boy did I have a lot of aggression. But unsurprisingly people just got annoyed very quickly with me.

All this from a sortie of words with a payload.
What if this got out? A poet afraid of words with a payload would the twisted version be. But I am not afraid I just like peace and will go out of my way to avoid battles, wars, all forms of melee.
What do I want? Silence, Hardly! Peace and well-being for all who know me. And prosperity.

Now I know that fate is deaf-blind and stupid and has always been a part of me, I feel history repeating on me. I feel in the middle of a mad melee. Fucking word bombs and self-fulfilling prophecies. Some people will not listen to reason. Some people from an early age have been spoiled and rapscallion.

Maybe this person was just trying to get under my skin in a hopeless game of one-upmanship. Fucking loser. 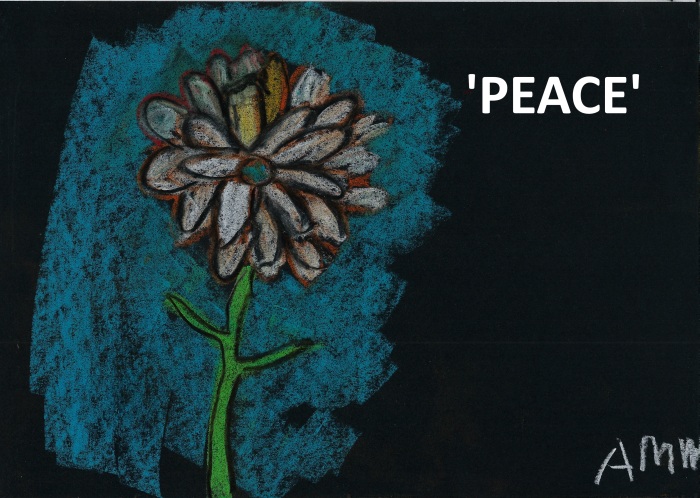